We woke very early at Binga Hot Springs, hoping for good sun rise shots. I took the camera to the hot pool and waited…and was disappointed. The sky, with all the clouds about, was gun metal grey! Eeeuw – not the colour one commonly associates with the Zambezi.

And then…suddenly, the light changed…

I rushed for my keys, camera and wrap and charged off. I wanted to get to the water’s edge before I missed the colours I could barely see from up on the ridge.

Roaring along the road, I spied a track (although that term is probably also an exaggeration!) heading off towards the water, only wide enough to contain the car, but not the rear view mirrors! I burst out of the thick scrub, maybe 200m later onto what would normally be underwater. White boulders dotted about, hiding sharp sticks and driftwood. I barrelled over this, trying to get as close to the water as possible. I didn’t want to miss the light, sweeping across the water…ok, Ill stop with the yak – have a look at the photos: 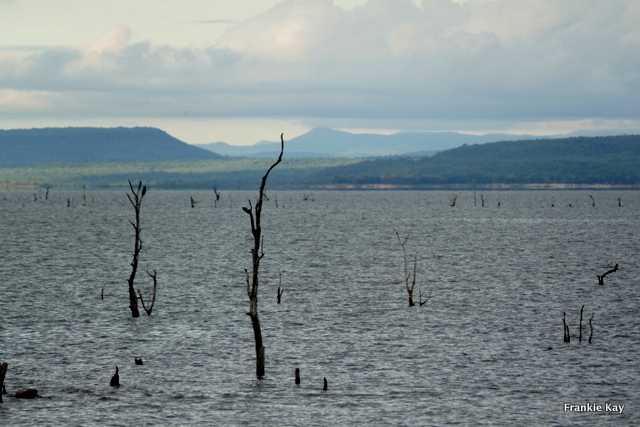 The water is low right now, and the sticks form lovely fishing spots.

Cattle don’t seem to mind it! 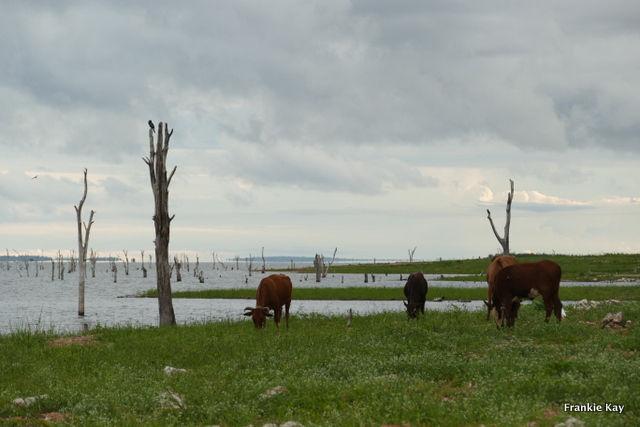 I messed with this pic (above) rather! The cloud, building up behind me, added to the dramatic early morning light.

The place I had come out at was where the water from the fish farm enters the lake. Everyone was fishing there! Birds, crocs, people!

I pulled a stick of imfi off the back of the car, and sat chewing it (for those of you who don’t know: its a kind of sugar cane, but softer, easier to peel and chew.) Simply peel it with your teeth, then bite off a chunk, chew it, spit it out!)

A Kapenta rig chugged past us, then another one went in the other direction 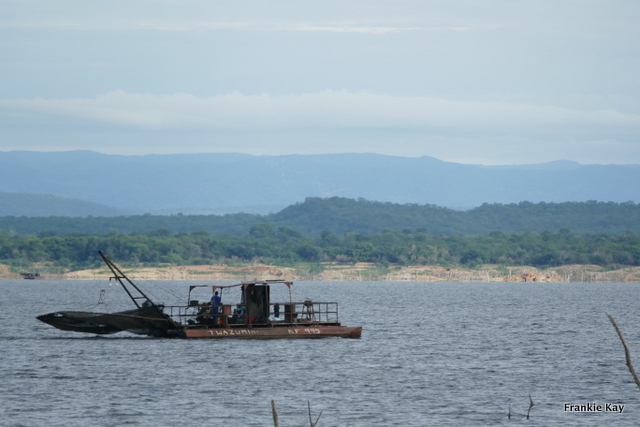 …and then I got hungry. I’d been sitting for nearly two hours with only a few bites of sugar cane, and so decided to go back to the resort for breakfast!

Now for the blonde moment! I couldn’t find the opening to the path! I’d been in such a hurry to get to the water’s edge, that I’d not looked anywhere but the road (or ground rather!) immediately in front of the car. I’d jigged and zagged around boulders, sharp sticks and holes, but with my eye on the target – the water! Much more sober now, I couldn’t see my tracks and didn’t feel quite up to driving around looking for the road. Walk you say???  Not a chance! I pretended I wasn’t lost – taking some more pics, further from the water’s edge!

In the distance, I saw a building. I thought: “building – road to building!” and headed that way. Eventually I found my way to a road, thence to a lush garden with cute little lodges, all facing towards the water….to a locked gate! A pretty angry man came to open it for me, but seemed to accept that I was a dumb blonde who had talked the security guard into opening the gate for me to take pics, he simply wouldn’t believe that I’d managed to drive so far along the river’s edge.

Yes, every day is an adventure in Africa!