The ruins are very close to Bulawayo; an easy drive through the Western Suburbs and industrial sites. Well kept, the paths neatly cut with good signage, makes Khami a great place to spend an afternoon.

I’ve posted this pic first, because its the most impressive facade and the wall most people know at Khami.

I love the way the builders just included the rocks in the wall!

A slightly different view of the wall and right up above this section on the left, is this: 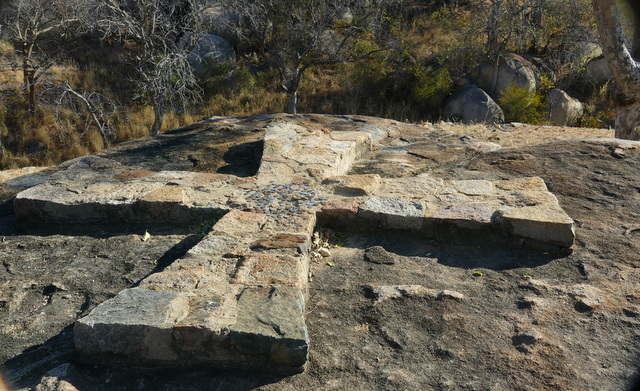 Thought to be built by the Portuguese, this cross was reconstructed in 1939, so it could have been any shape. The pic (below) shows the rock with the cross on it.

I’m always fascinated by the inhabitants of the Ruins of Zimbabwe! Wonder what they would tell us from stories passed down! I got sidetracked by this little guy!

He climbs down rocks – head first! Amazing little fella. I followed him around the rock until eventually he got sick of me and disappeared into a crevice.

This is a close up of a section of the steps – those holes must have held poles – but holding what up? Again, as at Great Zimbabwe, that mortar above the rocks is pretty hard wearing and its an aggregate, I’m told, almost as hard as cement. Perhaps large sections of the ruins were once plastered with this? Who knows?

This pic (above) shows those slots in the brick work …perhaps they held up a portico?

Like many of the other ruins in Zim, the walls are pretty thick with wide open doorways.

And they are often constructed in tiers, filled in with soil… 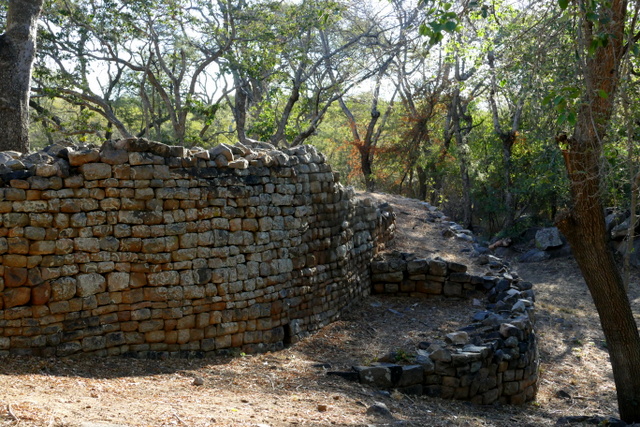 Would you believe when the settlers arrived, they built a dam – right over the top of this site????

As you can see, the wall has collapsed in several places, and unless the dam empties, it will be pretty hard to repair. 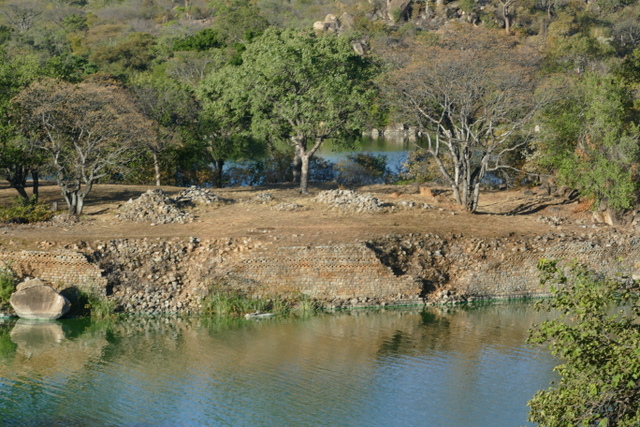 These two pics were taken from the “outlook point.”

Amazing. Thank you. That is a lot of rock(s)!

How old are the Khami Ruins? I’m fascinated by ancient stone circles, monoliths, and man’s inclination to BUILD.

Archaeologists put the age at about 600 years ago, with others putting them at several thousand years. But since the issue of who built them has been politicised, its not easy to decide which version to believe! Certainly many different peoples have occupied them over several centuries. For me, this controversy only enhances their appeal!

It does look like Great Zimbabwe. Probably built around the same time, would you think?

Certainly parts of it appear to be

Thanks – its a lovely place to visit

As is India still for me! My grandfather was born in Poona. Zimbabwe is beautiful as are the people. Like India, Africa is a large place, and very different from one region to another.

Interesting. Difference is India is one country .

Khami is added to my “must do” list on the next visit.

Foreshuwa! Its very well kept and one can spend hours on the “how’s and why’s” of the structures!

Amazing building work and super patterns. Never knew it was there when I lived in Bulawayo…wonder why. Missed opportunity. 🙁
Thank you for all the different angels. Great share.
Love the little critter
xx

i think the archaeologists were working on the ruins at one time – maybe then?

🙂 Oh my I have aged well then xx